According to the World Bank, Cambodia’s agricultural gross production grew by 8.7% during 2004-2012 mainly due to higher productivity of paddy rice. There was also a significant increase in maize (20%), cassava (51%), sugarcane (22%), and vegetables (10%) production. Agricultural exports – including rice, cassava, maize, pepper, fresh mango, and raw palm oil – reached 4.2 million tons in 2018, accounting for 22% of Cambodia’s GDP and employing about 3 million people.

Like many countries in the world, Cambodia’s forests are under mounting pressures. Trees are being cut down and replaced with cash crops like cashew nuts, and cassava. Many trees disappear due to the need for large and small-scale economic development. On small scale deforestation, in the last decade, forested areas have been rapidly cleared for small scale agricultural lands, with deforestation generally accomplished by hand through an unplanned process. These small-scale farming practices represent a primary underlying cause of deforestation in Tumring REDD+ Project area.

Agricultural support impact assessment plays an important role in ensuring effectiveness of supports into this project area. Thus, this information brief assesses the effectiveness of supports provided to the three targeted CFs. Based on findings from this assessment, this information brief offers recommendations on how to improve agricultural productivity for other CF members to improve livelihoods of other CF members within and near the project area. This should then lead to slowing down of deforestation rate not only in the project area, but also in the whole province.

A community member was trained by an agricultural staff contracted with the Tumring REDD+ project.

Methods used to collect data for this study were questionnaires, semi-structured interviews, in-depth interviews and field observations. Interviews were conducted with CF members to assess their farmed crops and farmland areas. 75 CF members (15 of whom were women) representing 75 household members in the three CFs participated in the questionnaires and interviews. Interviewer was a staff of Sandan’s Agricultural Office, which is a partner of the Tumring REDD+ project. Interviewees were either husband or wife, who are CF household members. Field observations were also conducted at the project site to gather information on the status of available crops, farmland areas and its storage facility. Additional to these primary data, the research team also gathered secondary data from different sources of literature such as reports and news articles to contextualize and validate findings from the questionnaires, field observations and interviews. Data analysis was done using Microsoft Excel 2016.

A proportion of the respondents (55%) were in the 40-50 age group. A majority of the participants did not have any educational background, while only 6% (20-30 age group) went to school, studying between grade 1-5. Regarding agricultural experience, a majority of the interviewees (70%) have been farming for 10 to 15 years. Almost all CF members (95%) have been planting rice, cassava, cashew and raising cattle and poultry for decades – farming and grazing on their agricultural land size that ranged from 1.5 to 10 ha.

Rice and cassava were the main agricultural crops in 2018. Regarding agricultural land for rice, O’ Kranhak and Prey Tatey CFs have smaller farmland compared to Kbal Dountey CF, accounting for around 0.5-2 ha and 2-4 ha, respectively. Conversely, Prey Tatey and O’ Kranhak CFs’ agricultural yields were at 2 000 – 2 500 kg per ha, while Kbal Dountey’s rice production was a bit lower at 900 – 1 300 kg per ha. In terms of cassava, the yields for all three CFs were similar. CF members from the three CFs have occupied farmland for cassava plantation from around 1 to 4 ha, and this land could produce about 5 to 12 ton of cassava per ha. 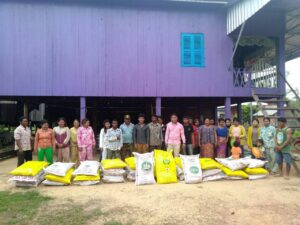 An insect and climate resilient cassava seeds supported by the Tumring REDD+ project was distributed to 75 different householders within the three CFs. High productivity was observed in Kbal Dountey and Prey Tatey CFs which produced about 10 to 20 tons of cassava per ha. 20 households in Kbal Dountey and 25 households in Prey Tatey CFs applied organic fertilizers. However, 25 households in O’Kranhak who used organic fertilizers generated the lowest cassava yield per ha, between 5 and 15 tons. 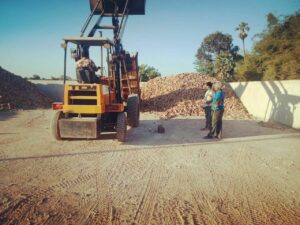 Community members sold their cassava to a middleman in the village. 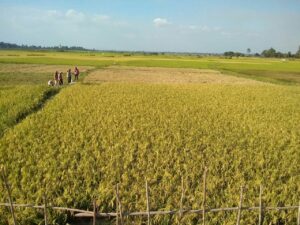 The interviews revealed that there are several challenges that household members faced. These include:

The interviews also revealed the following opportunities for potential investors, which could then help improve CF members’ livelihood: 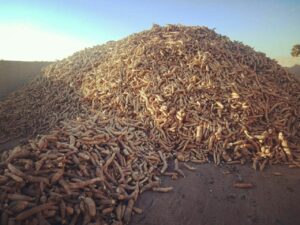 Cassava stocked at a middleman’s place in the village near the CF members’ houses.

Drawing from the key findings section, the following recommendations are proposed:

This information brief was supported by Tumring REDD+ Project and was prepared by the Project Management Unit (PMU). The PMU was assisted by Sandan Agricultural Office’s staff and management committee members of Kbal Doung Krey, O’Kranhak, and Prey Ta Tey CFs to conduct interviews with their CF members.