Reducing Deforestation through Agriculture Cooperative: The case of Samaki Meanrith

Home/Uncategorized/Reducing Deforestation through Agriculture Cooperative: The case of Samaki Meanrith
Previous Next

Reducing Deforestation through Agriculture Cooperative: The case of Samaki Meanrith

1. Background
The International Cooperative Alliance (ICA) defines a cooperative as an autonomous association of persons united voluntarily to meet their common economic, social, and cultural needs and aspirations through a jointly-owned and democratically-controlled enterprise (ICA, 2005). According to Cambridge Dictionary, Agriculture Cooperative (AC) is an organization in which many small farms work together as a business, especially to help each other produce and sell their crops. In Cambodia, the Ministry of Agriculture, Forestry and Fisheries (MAFF ) refers to AC as “private legal entity and agricultural-based economic enterprise which are voluntarily established by natural entities with their joint investment, joint ownership and joint democratic management in order to improve agricultural production capacity, agro-industry, agri-business, or services related to agricultural production aimed at enhancing economic, social and cultural status of its members”.

Cambodian ACs contribute to reducing poverty and developing rural communities because they play a significant role in rural financial services by providing farmers with low interest loans as compared to other money lenders (Theng et al 2010). In addition to financial services such as loans and collective saving groups, members of the ACs support each other in terms of provisions of agricultural inputs (e.g. seeds, fertilizers, chemical pesticides, farming tools, others), other farming techniques as well as access to markets. The ACs also provide the bridge for the Cambodian government and civil society organizations to connect and support small-holder farmers to improve food security and livelihoods. Farmers within the ACs are allowed to independently operate their farms. They can diversify their crops based on their locations and living conditions. In recent years, the main production of ACs in Cambodia saw greater yields of rice, maize, soybeans, mung-bean, sesame, cassava, rubber and banana being produced. 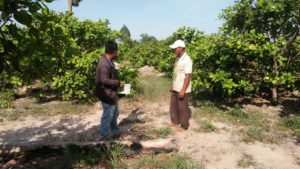 Kampong Thom province has a total of 479,689 hectares (ha) of forest areas, 278,228 ha of rice paddy, 845 ha of maize, 29,000 ha of cassava, 107, 978 ha of rubber (Cambodia Investment, 2014). However, data relating to cashew plantation areas, which currently dominate most of farmland across the province, is limited. Mango is also another potential crop for this province.

Increasing number of migrants and demand of agricultural lands have resulted in conversion of forestland in some areas of the districts, including Sandan. Migrants encroached forestland to build houses and plant cassava, cashew and rubber to support their livelihoods. These activities have deteriorated forest resources and biodiversity. There have also been some opportunistic investors who bought encroached land and logged timbers using these migrants as the agent of deforestation.

Tumring REDD+ Project started in 2015 with the aim of supporting 14 community forestry (CF) groups located in 17 villages in Kampong Thom to protect the remaining forestland from illegal encroachment. One of the project’s objectives is to support local communities’ livelihood by increasing agricultural productions. To implement this objective, the Project Management Unit (PMU) is facilitating the process and functions of Samaki Mean Rith AC, which was established in 2018. The AC currently has 83 households as members, who are very active. Each member owns fertile agricultural land. Every year, these households produced huge amount of cassava, rubber and cashew, which enable them to generate revenue to support their families.

Agricultural resources assessment plays an important role in ensuring access to market and attracting potential investments into an area. Given the importance and potential of Samaki Mean Rith AC in terms of its contribution to improving livelihoods of its member, this paper assesses the potential agricultural crops and analyzes production capacity of those crops in the AC. Based on this finding, the paper offers recommendations on how to attract responsible middlemen or appropriate investors to buy agricultural products from this AC, which then can improve livelihoods of the CF members.

Methods to collect data for this study were questionnaires, semi-structured interviews, in-depth interview and field observation. Interviews were conducted with each AC member to assess their farmed crops and farmland areas they own. 83 AC members (28 of whom were women) participated in the interviews. Interviewer was a staff of Actions for Development, which is a partner of Tumring REDD+ project. Interviewees were either husband or wife, who are AC household members. Field observation was also conducted at the project site to gather information on the status of available crops, farmland areas and its storage facility. Additional to these primary data, the research team also gathered secondary data from different pieces of literature such as peer-reviewed journal articles, reports and news articles to contextualize and validate findings from the field observation and interviews. Data analysis was done using Microsoft Excel 2016.

As of May 2020, Samaki Mean Rith has 83 household members (28 of which are women). Each household member has to pay 10,000 Riels (USD 2.5) for membership fee, which has to pay only once for a permanent membership. Each member has to purchase at least an AC stock, which costs 50,000 Riels (USD 12.5). Each member can buy as many stocks as they can. Currently, there are only two household members who bought 15 and 13 stocks, respectively. This follows by four members who purchased 10 stocks each. A large majority of members bought from 1 to 3 stocks. Consequently, members bought 221 stocks in total, which is equivalent to 11,050,000 Riels (USD 2,763), while membership fees of 830,000 Riels (USD 208) are collected. This money is an important capital for the AC as it is used to lend to the AC members who need it to buy fertilizers and other agricultural materials.

ACs provide benefits to their members in terms of market access, agricultural material loans and agricultural technique supports; however, no legal conditions have been set for their members to comply with when they cleared natural forestland to grow their crops, including Samaki Mean Rith AC. This case study found that some AC members and people in general encroached and cleared forestland to plant their crops, including cassava, cashew, rubber and other crops because the AC Management Committee did not apply any stringent measures to curb this forestland clearance issue. Additionally, most buyers, who have bought agricultural products from Samaki Mean Rith AC, had no knowledge on the potential impacts of the crops they bought on conversion of forestland and forest degradation. For more information, refer to Understanding Perceptions of Local Traders on Agricultural Commodities Trade and its Link to Deforestation in Tumring REDD+ Project Site. 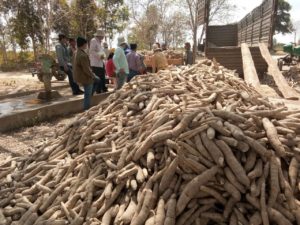 Harvested cassava were sold to middlemen by AC members

According to the data, cassava is no longer the main commercial crop for farmers in the project area because the revenue they earn from this is much lower than the efforts they put into farming it. Field visit confirmed that cassava is now only being planted by poorer households because it requires less resources and time comparing to other commercial crops. Some of the richer families in the AC planted cassava; however, it is only planted as a pioneer crop. It means that cassava is only planted between rubber or cashew nuts at the first 2 or 3 years. When rubber and cassava are getting bigger, cassava will be removed. Among 83 household members, there are only 3 members who planted cassava. These three household members planted 28 ha of cassava, which could generate an income of about 166 400 000 Riels (USD 41 600) if they can sell it at 320 Riels per kilogram (see table 1). The cost of cassava is divided into categories: dry and wet cassava. Dry cassava is more expensive than wet cassava. Every year, wet cassava costs between 290-350 Riels per kilogram, while dry cassava costs from 400-650 Riels. Finally, poorer families are always the first to encroach forestland to illegally plant cassava. Then, middle income or richer families would buy those encroached land areas to plant their rubber or cashew. Those poorer families will continue to encroach new forestland areas after they sold their encroached lands.

​Household members are still interested in rubber​ as market price remains high. Rubber is a commercial crop, which needs careful and costly maintenance. This crop is planted by middle to high income families only. According to this survey, only about 18% of the AC members is still cultivating rubber, over an area of 106 ha. This could generate an income of around 2 786 400 000 Riels (USD 696 600) if they can sell it at 1 800 Riels per kilogram (see table 1). Overall, rubber generates the highest income compared with cashew and cassava. However, this cost has fluctuated over the years. Rubber plantation in the project site is deemed to be stable. It means that farmers are not significantly converting rubber plantation into cashew plantation or increase rubber plantation by converting more forestland. 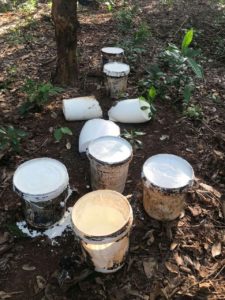 Household members in the AC and the broader community are shifting their plan on cultivating agricultural crops as cashew has become a popular commercial crop, particularly for markets in Vietnam and China. The price for cashew nuts has been high. Cashew is a fast growing species, which needs careful maintenance. It requires proper fertilizers to grow fast and strong. Farmers need to manage weeds along each cashew row to prevent fire and invasive species. According to the collected data, about 78% of the total AC members plant cashew in comparison to other crops such as cassava and rubber. These farmers control an area of 477 ha of cashew plantation, which could generate an income of around 2 319 350 000 Riels (USD 579 837) if they can sell the cashew nuts at 5 500 Riels per kilogram (see table 1). Price of cashew has been fluctuating over the years. It is between 3 500 and 8 000 Riels per kilogram. The peak time, where people sell their cashew, is in late March and early April. It could be seen that cashew is playing a very important role in generating income for farmers. However, richer families could buy more land from poorer families, who illegally encroached forestland, to plant cashew trees. This has led to forest cover and biodiversity lost in the project area.

Farmers were collecting cashew in their farmland

The interviews revealed that there are a number of challenges that AC household members face. These include the following:

The interviews also revealed the following opportunities for potential investors, which could then help improve AC members’ livelihood development:

Drawing from the key findings section, the following recommendations are proposed:

This information brief was supported by Tumring REDD+ Project and prepared by the Project Management Unit (PMU). The PMU was assisted by Actions for Development (AFD) staff and management committee members of Samaki Mean Rith AC to conduct interviews with their CF members.