In terms of cassava productions, A UNDP study in 2019 found that investing in cassava can result in higher yields than investing in rice, rice production, livestock, food and beverages, and tourism sectors. Ministry of Commerce indicated that cassava is the Kingdom’s second-largest crop after rice and requires a national policy, which could promote exports to the international markets. More than half a million families are growing cassava, and this national policy will help improve their livelihoods.

Tumring REDD+ Project was established in 2015 to support 14 community forestry within 17 villages to protect the remaining forestland from illegal encroachment. One of the project’s objectives is to support local communities’ livelihood by increasing agricultural productions and preventing future forestland encroachment.

Local traders identified cassava and cashew as the most popular crops given that they are grown almost everywhere in the project area. These two crops are of high demands in both local and regional markets. On the other hand, corn and bean are not as prioritized as cassava and cashew. A majority of the local traders expressed interests in cassava as farmers could plant and harvest this fast-growing crop annually, from September to May. Cassava has higher market demands because most of them are exported to Vietnam and Thailand. After cassava, cashew has the second highest market demand compared to bean and corn, which traders do not buy in bulk. 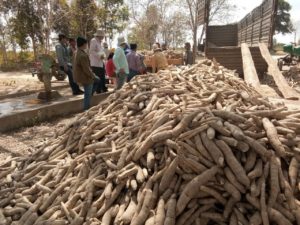 Local traders have faced a number of issues in their trading processes. First, they need to pay for high transportation cost due to the long distance. To add more complication to this first issue, road access is also an issue to traders given that most of the farm locations are often located at the edge of the forest areas. Second, because most farmers produce low quality agricultural products, the long-distance transportation time further deteriorate the product quality. This means lower profits. Furthermore, the price fluctuation, mainly controlled by buyers in Thailand and Vietnam, is another burden with local traders.

In terms of local traders’ perceptions on the link between agricultural production and deforestation, most of the traders expressed that they are not aware of this link. However, a small portion of the interviewees stated that farmers are extending their agricultural land by clearing forestland to grow cassava, cashew and other crops. To address deforestation linked to agricultural commodity production, local traders proposed that the project should start with awareness raising on forest law, particularly regarding forestland clearing as well as the link between forestland clearing and its impacts on the environment. They also suggested that the project should support patrolling activities to protect the remaining forestland. Finally, local traders support the implementation of the AC to facilitate the trade with local farmers.

Acknowledgement
This information brief is supported by Tumring REDD+ Project and prepared by the project management unit. Interviews with local traders in the project area were conducted with the support from Actions for Development’s (AFD) staff.